Even the most superficial survey of communities around Australia and the world would help us identify some communities where young people and their extended families are thriving, and others where it would be hard for even the most resilient person or family to flourish.

But communities, families and individuals can change. We can, as we’ve explored previously , leave behind unhelpful attitudes that have become ingrained, and replace them with values that give expression to our deep desires for a better way of life. Click here for more about Values.

In the coming months, we’ll explore more about some values that as Fusion, we have identified as life affirming, growth promoting and community strengthening. These values will help us be transformed personally and ready to build transformed communities where young people and their families can thrive.  The first of these is JUSTICE.

Justice, a Fair Go and Equality

Often our idea of fair depends on our viewpoint. Just observe kids trying to play harmoniously together, or adult spectators supporting different football teams responding to an umpire’s call! Most of us can find some way of justifying our point of view or behaviour and we can usually argue a persuasive case for the rightness of our standpoint.

Our culture champions the idea of “a fair go”.  We like to think that we are fair, that we treat people equally without favouritism or discrimination. 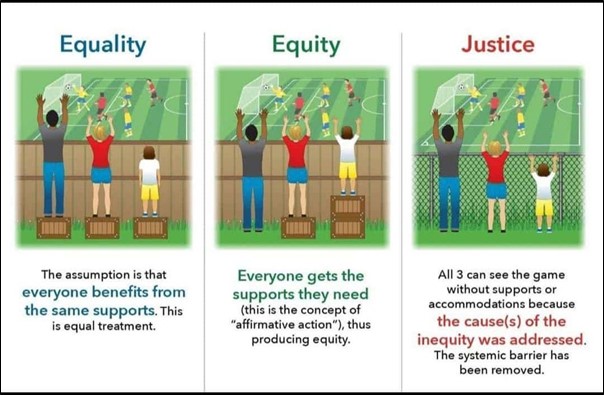 Have a look at this picture.

Does EQUALITY or EQUITY bring about JUSTICE for all those trying to see what’s on the other side of the fence?

JUSTICE looks like getting rid of the fence, or changing what it’s made of, so that everyone can see what’s going on, with their own two feet on the ground.

A Just Society or Community

Behind the dictionary’s definition of JUST lies a Judeo-Christian understanding of JUSTICE which has historically underpinned the way our society, and particularly our legal system, understands what JUSTICE is.

In the Hebrew Scriptures (AKA the Old Testament), the Hebrew word for JUSTICE is translated into English as both justice and righteousness. A just society, family, community or person does what is right. And within the Judeo-Christian worldview, what’s right is determined by the teachings contained within the Bible, appropriately applied to our contemporary situation.

While scholars debate the meaning and application of particular passages, ordinary people often find sufficient guidance in teachings such as the so-called Golden Rule to “treat others as you would want them to treat you” or Jesus’ Sermon on the Mount, or even The Ten Commandments*.

What History Tells Us

Both the nation of Israel and the early Christian church gave expression to these teachings in ways that were a stark contrast to the surrounding culture. Their idea of JUSTICE demonstrated a concern for those who were marginalized and taking restorative action on their behalf.

Redistribution of wealth and amnesty from debts was supposed to occur regularly, and there was a local community-based system of income support.

The nation as a whole, its leaders and each individual were given specific instructions to intervene on behalf those who were marginalised, to use their resources to enable everyone to experience what the Hebrew word SHALOM represented, namely the ideal state of life…wellbeing, harmony, health, security, abundance, a long life of happiness ending in a natural death. **

The way to shalom for the Hebrew people was the embrace and incorporation of the Laws into everyday life and behaviour. By doing so, you knew your place in the world around you, and how to relate to the people and things around you in a right, just and proper way.  As we understand it, this may not be all that dissimilar to the indigenous notion of Tjukurpa, variously translated as the Dreaming, the Abiding or the Enduring.

What does this mean for us?

Perhaps there are some clues in these approaches that will help us to contribute to the building of transformed communities where young people and their families thrive.

Perhaps we need to explore the foundational values that lie beneath the best and healthiest expressions of human life together.

Perhaps we need to encourage ourselves and those around us towards these behaviours.

Perhaps we need to contribute to the public discourse and to ongoing conversations with those who enact laws and regulations to guide our behaviour.

Then perhaps we’ll be able to make a contribution to the building of communities which are more just, more merciful, and where deep reconciliation between people can take place. In such transformed communities, young people and their families will have more chance to thrive.

If you’d like to find out more about VALUES and how to build them into your life, we’d love to talk to you more.

Check out our TRAINING opportunities for more info.

← How can you be a good neighbour? What is Mercy? →